The Lost City of Z--David Grann 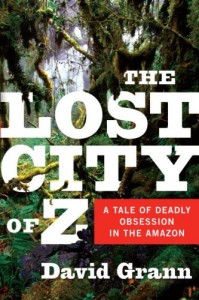 I had read about this book last year when there was a huge amount of hype.  I'm highly allergic to hype--I break-out in all sort of unpleasant spots and rashes.  I stayed far, far away for fear of the hype-allergens.

Strolling through the Library looking for books to support my son in his study of the civilizations of Peru, I saw this.  The hype had died down, everything was safe for approach, so I grabbed it off the shelf opened it up and fell in.

Fell in completely--so much so that midway through reading I went out and purchased the book.  For those of you who as children read the "lost worlds" novels of Arthur Conan Doyle, Edgar Rice Burroughs, and most prominently H. Rider Haggard, this is a treat beyond imagining.  It tells the true story of a Amazon explorer who was dedicated to the task of finding the legendary lost city of Z.  Sometimes called El Dorado, sometimes thought to be completely impossible, the Lost city of Z became the personal obsession of Percy Harrison Fawcett and his family.

Fawcett had spent many years and had taken many trips to the Amazon river basin--one to map the boundary between Bolivia and Brazil.  In the course of his explorations he encountered all of the horrors of exploration (something often glossed over in the more romantic versions we're used to)--insects, predators, disease, and near starvation.

I think if anything came as a kind of ah-ha moment to me (though given my training it shouldn't have) it was the paucity of food available in the green darkness.  It is a kind of anti-paradise--so much so that many anthropologists concluded that no sophisticated civilization could have taken root in the hostile environment.

Normally I read non-fiction exceedingly slowly and in measured amounts so as to take notes and fully absorb what I am reading.  I read this one in big gulps and relished every moment.

In this case, the hype was right--good writing, good adventure, remarkable conclusion--satisfying all round.

Popular posts from this blog

Another Queen of Night

January 10, 2010
I post this because whenever I recommend to anyone the Queen of Night, I always recommend it in the Lucia Popp rendition.  It's a matter of personal taste, but what I love about this is that it is somewhat slower than the other versions and as a result, it would seem to me somewhat more difficult to perform and sustain--those high notes in which the Queen's voice becomes the Magic Flute itself are rounded, full, and deep while remaining light and airy. I have read some rather severe criticism of this ritardando; and while it may or may not reflect Mozart's intent, it is certainly within the options for staging.  It creates a real vocal showpiece from what is already a magnificent example of same. It really is an amazing example of a virtuoso composition sung by a virtuoso voice.  All of which should not be taken to mean that I do not truly appreciate the version posted earlier by Diana Damrau, it's just nice to see what a difference tempo can make.

I think we can take …
Read more

November 30, 2009
While talking about my favorite books with my wife, she pointed out the the conjunction of James Joyce and Lewis Carroll was not nearly so unlikely as it might seem with only a moment's consideration.  In fact, it makes a great deal of sense.  The playfulness that I love in Ulysses (and even more in Finnegans Wake) is already present in Carroll as a kind of verbal surrealism.  "It's a poor sort of memory that works only backwards."  But most particularly in the dialogue of Humpty Dumpty and Alice, in which Humpty explains:

from Through the Looking Glass and What Alice Found There


`And only ONE for birthday presents, you know. There's glory for you!'

Humpty Dumpty smiled contemptuously. `Of course you don't -- till I tell you. I meant "there's a nice knock-down argument for you!"'

September 29, 2009
Virginia Woolf was well known to have little patience with Ulysses.  Joyce Carol Oates, in her book The Faith of a Writer suggests that part of this may have been the jealousy of one genius admiring the aplomb and power of another.  Following is a quotation from Virginia Woolf's diary available from Fathom.

"I have read 200 pages [of Ulysses] so far," Virginia Woolf writes in her diary for 16 August 1922, and reports that she has been "amused, stimulated, charmed[,] interested ... to the end of the Cemetery scene." As "Hades" gives way to "Aeolus," however, and the novel of character and private sensibility yields to a farrago of styles, she is "puzzled, bored, irritated, & disillusioned"--by no grand master of language, in her characterization, but "by a queasy undergraduate scratching his pimples." No artifact of elite difficulty, Ulysses becomes for Woolf the "illiterate, underbred book ... of a self taught wor…
Read more